Johnny Bath is our beloved (former) butcher. He’s a strong man with a ready smile. His exceptional butchery skills and his eagerness to create something new are fixtures of Raeward Fresh’s deli. When he’s not spooling out some butchers twine to help a customer with their roast, or sharpening up his knives while chatting with a local about a sausage sizzle for their upcoming birthday party, he’ll be dreaming up new sausage creations. It’s part of his makeup – because Johnny’s been making sausages, thousands of them, all over the world for years.

As a young South African – in a land where chicken is considered a vegetable – Johnny began his training alongside his brother-in-law at the local abattoir. The place gave him an appreciation for where the meat came from, who sold it, and how to produce the best cuts for his community. He went on to perfect his butchery skills working in the continents largest meat works, processing (among other things) over 200 sheep per week. The works taught him how to manage large scale production, but it lacked a direct connection with people and the opportunity to collaborate. Always looking for a challenge, Johnny jumped up and stepped in when his butchery school instructor sliced four of his fingers on the first day of training and taught the class how to break down a half steer himself. Even though the meat works tried to keep him on, his desire to see the world at large got the best of him. 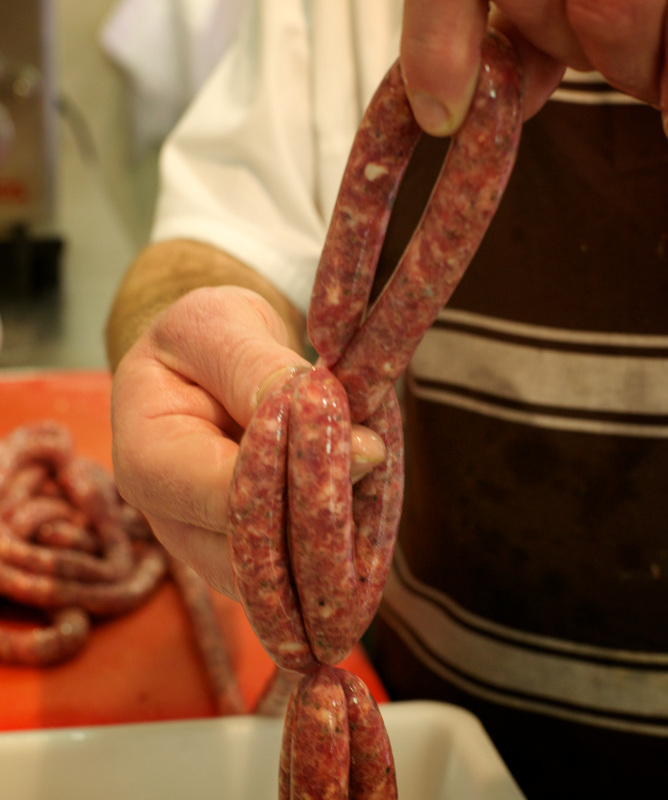 Being a bit of an adventurer, and a sky diving instructor, Johnny travelled the world meeting inspiring people while also furthering his butchery skills. In Denmark he worked with the director of the country’s premiere butchery school. He then hopped between Scandinavia and Israel for a few years before landing in what he considers to be the cherry of his travels – Queenstown, NZ. Johnny had been looking for something special and, like a lot of other people, feels he’s found it here. 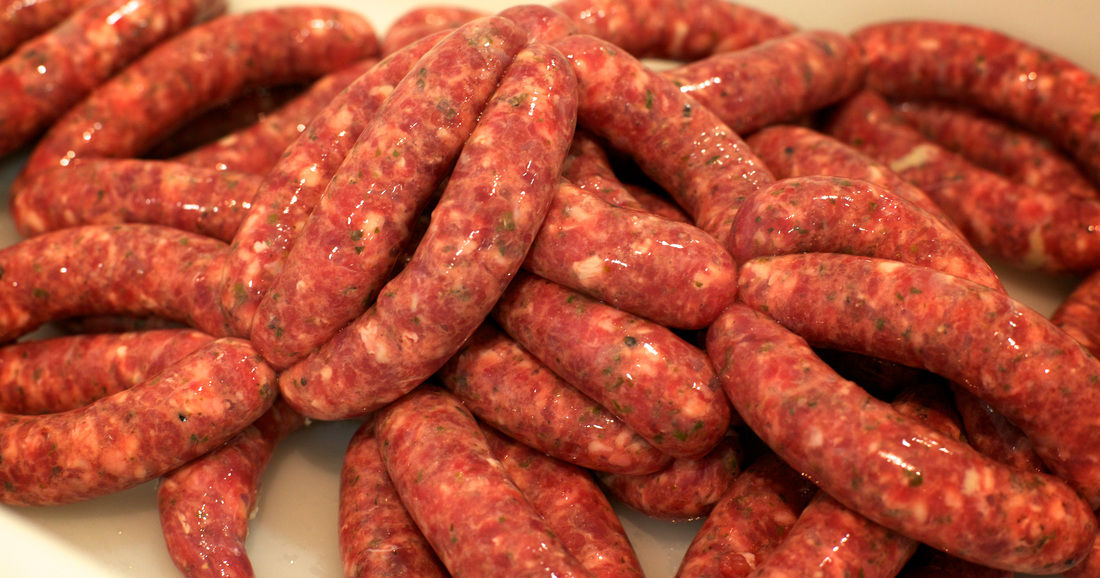 At the Raeward Fresh Johnny’s right at home in the middle of a dynamic conversation between his suppliers and his customers. Like his days back at the abattoir, he has regular conversations with those supplying his lamb, beef and chicken. But the inventor in him also loves the chance to chat with Raeward Fresh’s other producers, Mondillo winery for instance, where Johnny got the idea to add their surplus Merlot grapes to his cracked pepper beef sausages. 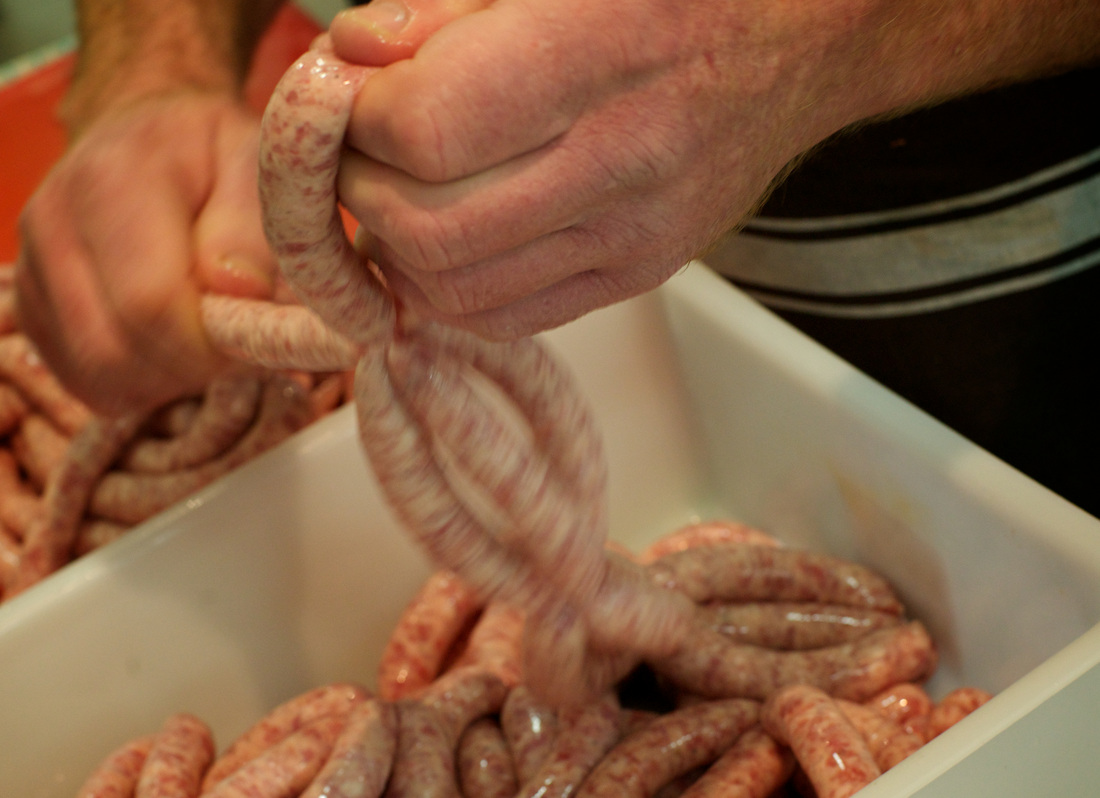 A bloke who’s always listening, always learning, he’ll be discussing new ideas with his customers and taking on board their good suggestions – like adding local mussels to Angus beef, or blue cheese to a pork sausage. He loves being the creative agent in the middle, daily roaming the store to gather a wide range of fresh supplies for the makings of his sausages, which have included:
• beef and mustard
• pork, apple and chive
• Merlot and cracked pepper
• beef and mussel
• dark chocolate and beef
• greek lamb
• Cumberland
• Boerewors
• Waitoa free range chicken
• pork chipolatas
• chorizo
• biltong and drywors

• preservative free and gluten free pork
All of these sausages use Johnny’s secret herbs and spices and are made with natural pork or lamb casings. (If you have any special dietary needs, Johnny also has detailed print-outs listing every single ingredient for each sausage) 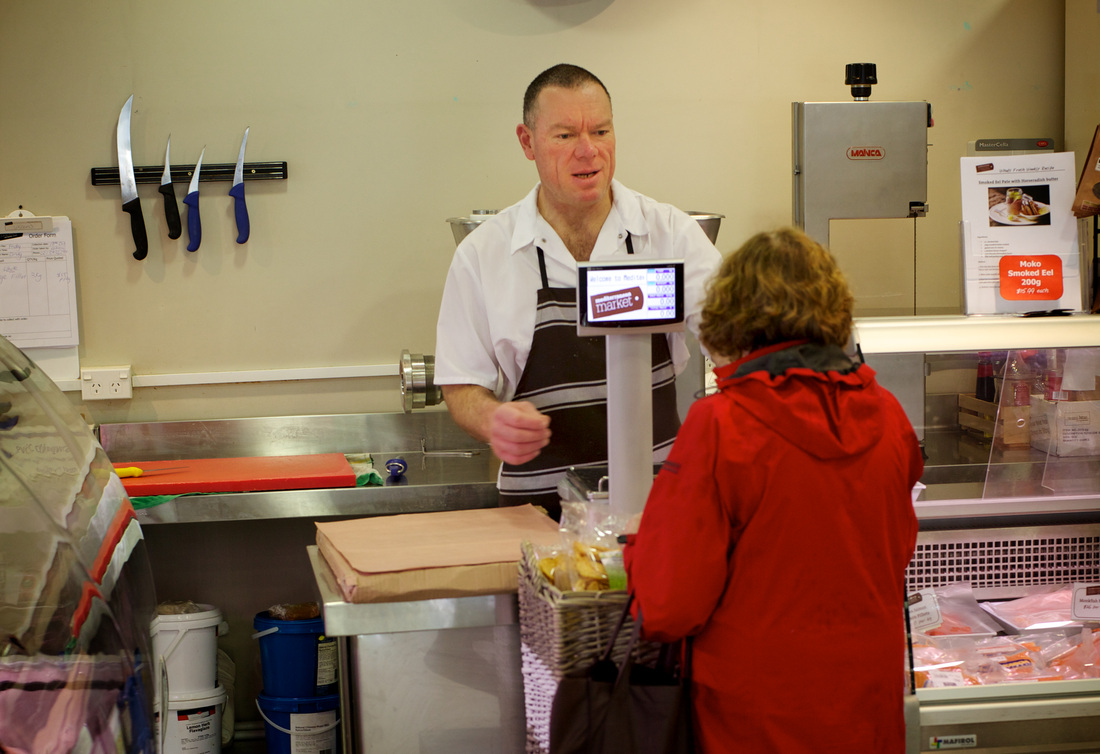 Johnny thrives on these creative connections, but when it comes to producing fresh sausages every day he’s all business. His large hands quickly line the sausage maker with all natural casings and he deftly pumps just the right amount of ground meat through the machine, tying off each sausage like an origami master. He fills orders, passes out samples to curious newcomers, and comes up with even more ideas as tray after tray of lamb and mint or gluten free pork sausages fill the cabinet. And when it comes to cooking them, he knows exactly what to do: “Pop them in the oven at 180˚C for 10 minutes, then turn the heat off and let the steam out. Close the door for another 10 minutes and they’re perfect!” Sausages baked “Johnny-style” come out of the oven crispy on the outside, juicy and full of flavour on the inside – flavours Johnny’s perfected with years of craft, beautiful combinations of the regions tastiest ingredients.
Next week our chef Anne Halson will remake a kiwi classic using Johnny’s greek lamb sausages.

Nutritional advice from Kim Malcolm
Understanding what holds your sausage together.

When the quality of meat and poultry used to make a sausage is unquestionably the best, then the best choice of casing to hold it together is a natural one. Natural Casings are made in the same way today as our ancestors made them centuries ago. Animal intestines are naturally cleaned, then treated with salt to make them ready for use. Natural casings have a unique combination of tenderness and thinness so they shrink equally with the meat while cooking to give you a better tasting sausage. These casings have natural tiny pores that allow the meat to permeate the flavour throughout the sausage and also allow the sausage to breathe when resting on your plate before serving, which further enhances the flavour.
Synthetic Casings are a mix of highly chemical processed options originating from cowhide, collagen, and cellulose fiber. There is a lot of technology attached to the synthetic casings right now, which make them more edible and digestible, but it is the process to get them to that point that needs awareness. If you want the best for your body, make sure everything you put in it, casings and all, or as healthy as can be.