They say it takes a tribe to raise a child. In this case Mr & Mrs Coconut have been the proud parents and the community of Raglan have been the supportive village. Raglan Coconut Yoghurt is the prodigy of this creative community – born of love and collaboration – and what a beautiful baby it is! I had the privilege of chatting with the diversely entrepreneurial Tesh Randall (Mrs Coconut) this morning to find out more about their amazing process and product. Tesh is an engaging young Kiwi who embodies the best of a new breed of foodie culture, people who care about making exceptional stuff from the heart. 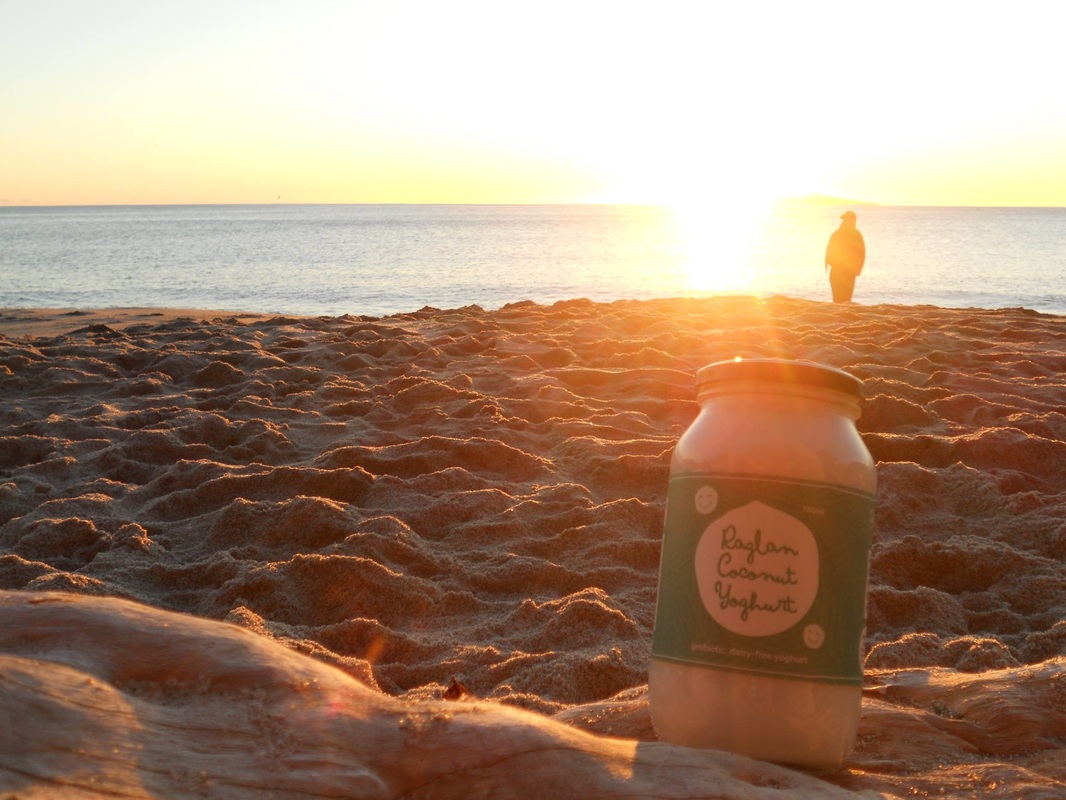 Tesh grew up in the Kumara capital of the world (Dargaville) and spent most of her homeschooled childhood around good baking with an exposure to the land at her grandparents nearby farm. Finishing school at 15, she soon went on to Whangarei where she took jobs in a number of fields from accounting to event management. By the age of 19, she had self-published her first childrens book, ‘Button Thief’, which she has sold over a thousand copies of to date by going store to store. From there, Tesh started focusing more on writing and, moving to Christchurch, worked for a radio station writing ads and freelancing other projects until the earthquake knocked the wind out of the city. Back north then, Tesh worked in Auckland running her own copywriting business, working from home and developing her web skills. Happily working away in this milieu, Tesh met her partner Seb (Mr Coconut) at an ‘Art Of Happiness’ seminar because they were both attracted to the vegetarian food on offer. 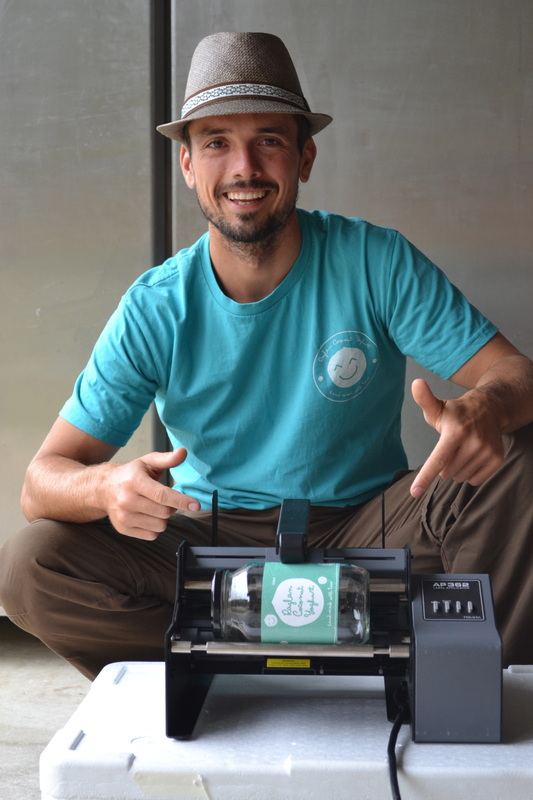 What has all that to do with coconut yoghurt you might be asking by now? Well, it’s the same as with the NYC lawyers who started WEKA olive oil, or the Cromwell school teacher who runs Off Our Tree Cherries. People with diverse professional and creative backgrounds bring all their skills together in the creation of something very new in the world of food. What’s unusual about Tesh and Seb however, is that they’re not retiring into food at mid life, they’re shifting gears in their mid 20’s. Seb had been working for Telecom and Tesh had been focusing on corporates in her writing and web development. They both wanted to break away from this scene and live more from the heart so, of course, they moved to Raglan. Like American musicians Jack Johnson and Ben Harper, Seb loves the surfing there and Tesh found herself at home in the community vibe. 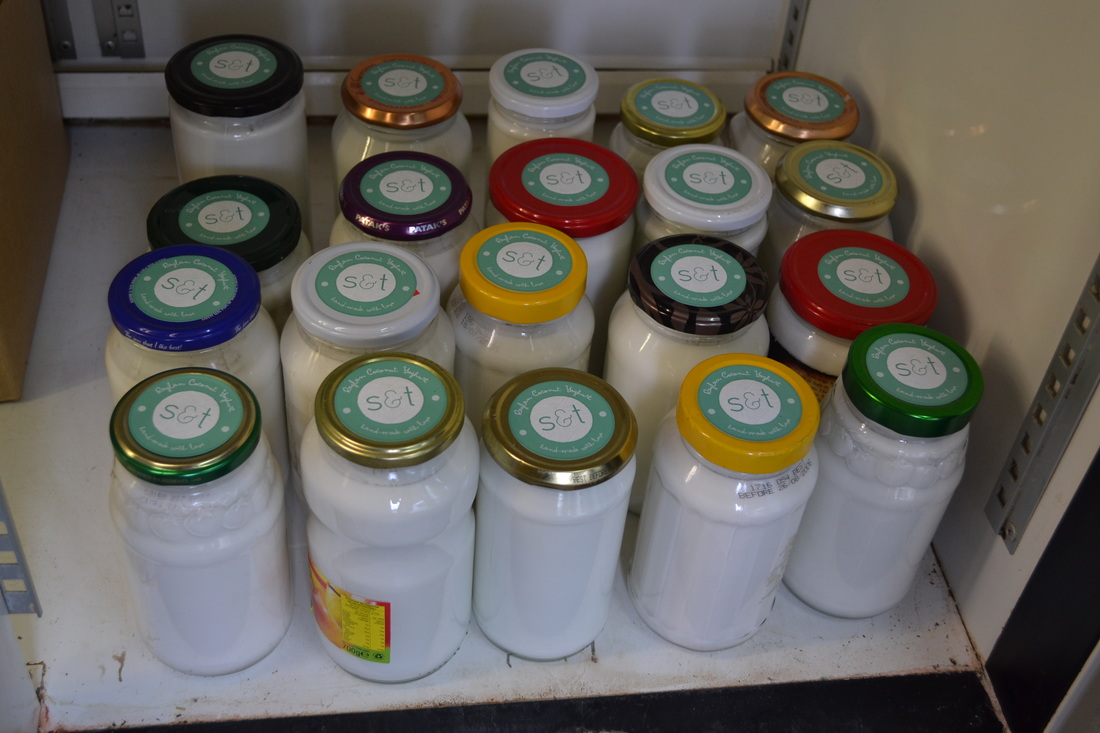 Seb and Tesh immediately started making things together. They loved creating various foods from Kefirs to Kombuchas and, Tesh tells me, the baking got a lot healthier than in her childhood “Edmonds” days. They also formed a company to help small businesses get on-line but felt like it was keeping them in the corporate scene more than they really wanted. Along the way, Seb noticed he was reacting to dairy products so Tesh started experimenting with non-dairy yoghurts. She’d heard of coconut yoghurt but wasn’t in love with anything at the stores. Tesh trial-and-error-ed through four months of iterations, trying different creams, incubation times, temperatures, cultures and mixing the coconut with other milks or creams. Eventually, she came up with something both she and Seb really liked (and this pair REALLY LIKE yoghurt, blending it in breakfasts, smoothies, straight up… all the time). 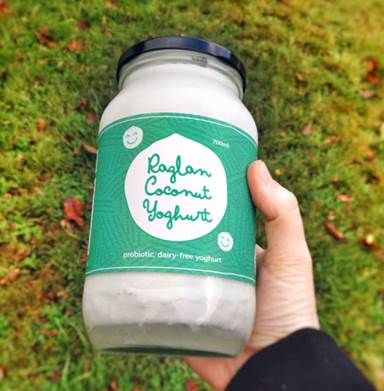 The final recipe was completely dairy free (good for Seb), had no refined sugars (a large 700ml jar has about 1 teaspoon of organic honey which comes from local bee hives based around the Manuka Bush of Mt Karioi), no GMO or preservatives, as well as also having millions of healthy probiotics (which my Mum tells me is even helping her eczema). Tesh and Seb started making larger batches of their new creation and one weekend, ended up with a bit of a surplus. Raglan being Raglan (where the community Facebook page has 3000 members helping each other find lost jandals or puppies), Tesh posted that she had a few extra jars if anyone was keen. Tesh’s post was flooded with requests and Raglan Coconut Yoghurt was born. She spent the next few days finding more jars (from Raglan’s trend-setting recycling centre) and making huge batches to fill 60 orders, which then became weekly requests. Her post was reposted, shared in Hamilton, Auckland and elsewhere until Mr and Mrs Coconut figured they’d have to make heaps more coconut babies. 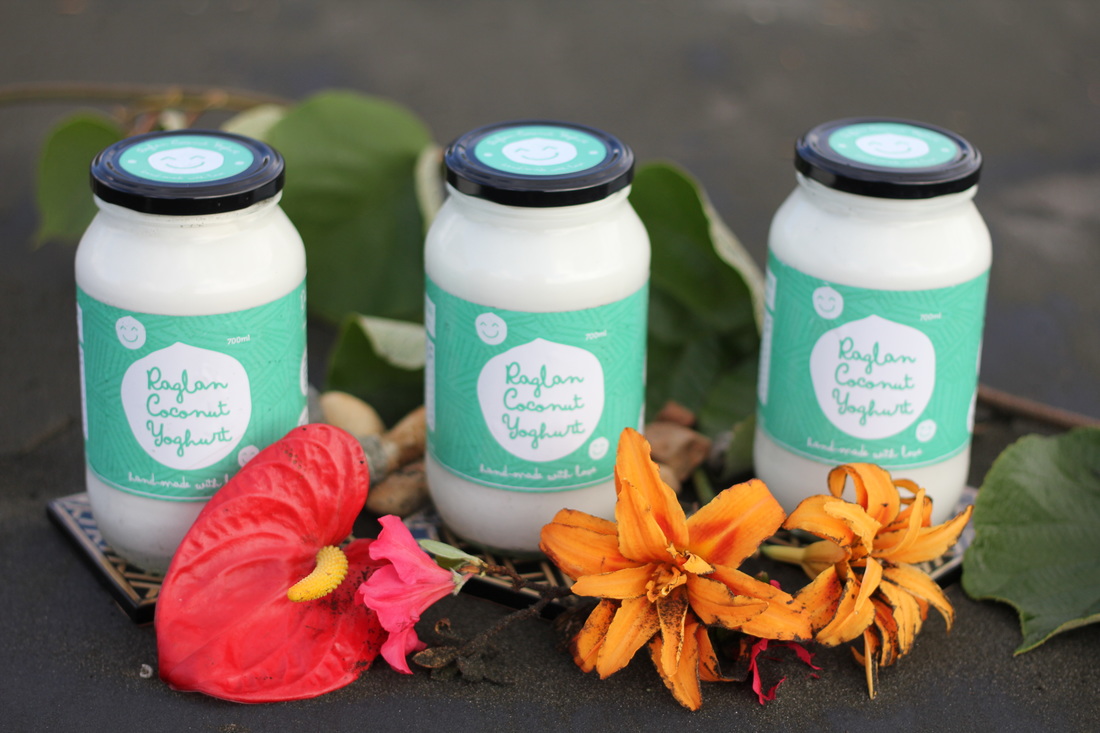 Seb’s strategic skills met Tesh’s kitchen / digital strengths allowing the couple to start a new business around this fantastic yoghurt (and, a very cool web site). But it was the Raglan community that kicked in to offer product feedback, word of mouth marketing and practical No. 8 wire support. For instance, when Tesh needed a bigger container to brew the yoghurt, a local metal artist converted a large pot by welding a spigot to the bottom, creating a large urn. You can buy this kind of thing of course, if you didn’t live in Raglan… Tesh loves that this same community has a “Time Bank” where she can write copy for a local business who, in exchange, will pay back with plumbing or baking or whatever’s needed. Tesh and Seb are also involved in local initiative KASM to help safeguard New Zealand’s beaches. 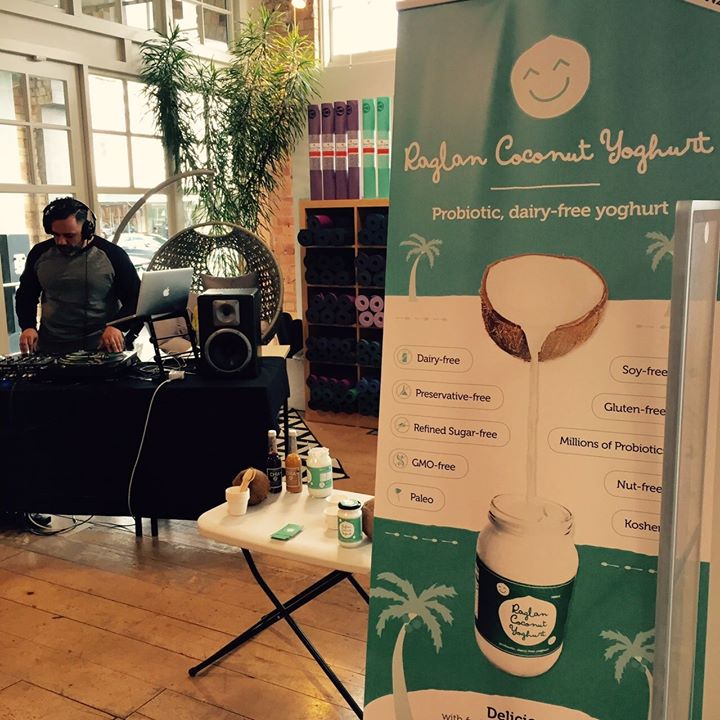 When you look at the overall story, it seems almost inevitably normal that such a creamy, deliciously healthy coconut yoghurt would come from a place and people like this. And, it makes sense that we’re not seeing this kind of quality or innovation come out of larger manufacturers who’s best efforts of late seem to be limited to coming up with cooler labels or brand names, born of paid focus groups rather than down to earth makers. Tesh and Seb seem to be glad for their experiences and connection to the corporate world, especially in terms of lessons learned in strategy or sales. But what they would really like to do is take the best of New Zealand food innovation and make it available to their neighbors (instead of all the really good stuff being sent overseas all the time). In fact, their first stockist was the neighbor down the street whose organics shop, Whaingaroa Organic Kai, is where they get the regions best groceries from others who also really care. At Raeward Fresh here in Queenstown, we fully appreciate the community behind Raglan Coconut Yoghurt and are really glad to be sharing their goodness with our own local communities of like minded food-lovers.
Recipe: Yoghi Bounty Bites – (DF, GF, RSF, Paleo) 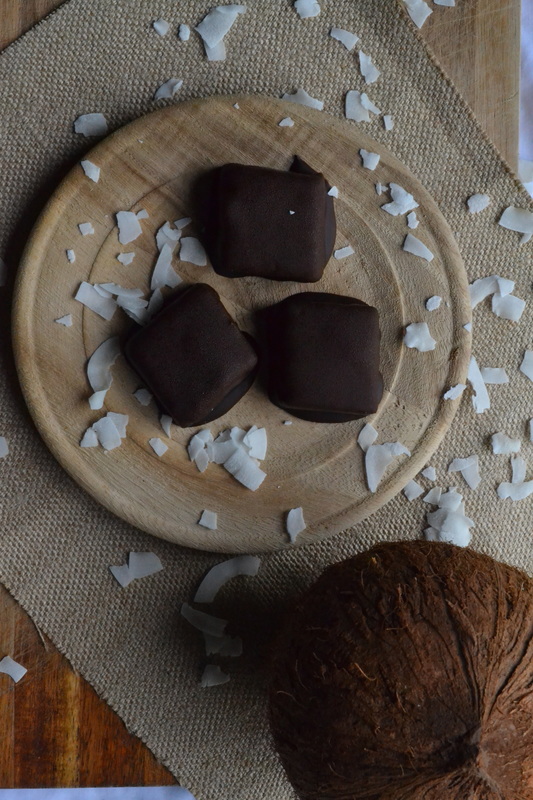 Tesh and Seb have put out a fantastic little cookbook featuring some wonderful personalities from around NZ and their favourite recipes using Raglan Coconut Yoghurt. It’s a wonderful read and Tesh and Seb are using the proceeds to build their own commercial kitchen. You can find a link to the cookbook here.
Ingredients
Bars:

Mix all the ingredients wet ingredients together in a pot.
Stir in the coconut until the mixture is clumpy, but not runny. The coconut nectar will give it a slightly golden colour. Press into a rectangle container lined with baking paper and pop in the freezer for 10 mins to let it firm up slightly.
Take out and cut into small bar shapes (recipe makes about 24), and put back in the freezer to harden completely.
Once completely frozen, melt chocolate and coconut oil together in a bowl sitting in a saucepan of hot water – you can add more oil for a thinner coating. Dip each bar smoothly through the chocolate using a spatula and knife, and it will snap freeze immediately.
Place finished bars on baking paper and try not to eat them all at once! They keep in the fridge for at least a week.