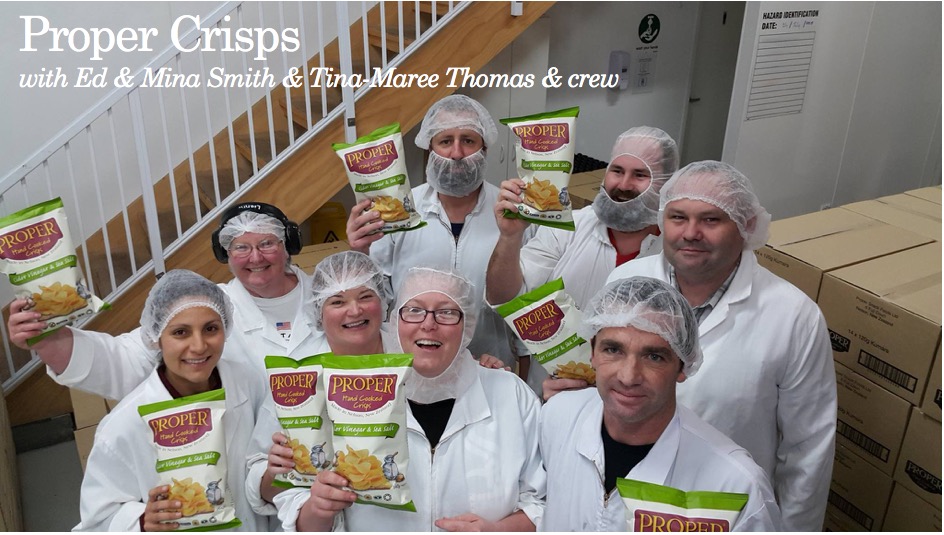 As a typical British boy, Stewart Franklin loved his ‘crisps’. He even sold them as a kid growing up in the UK. As a young man, however, his not-so-typical side emerged and he travelled to New Zealand, landing in sunny Nelson. Having worked in the crisps industry in the UK, Stewart wondered why NZ ‘chips’ were so average when the country possessed some of the world’s finest potatoes? In 2007, he decided to tackle the disparity head on and adventured back out into the big wide world, sampling other crisps and learning all of the various ways one could make a better potato chip / crisp. He settled on the idea of using a kettle and brought one back with him to make proper crisps. Thus was born the namesake company we love, “Proper Crisps”. 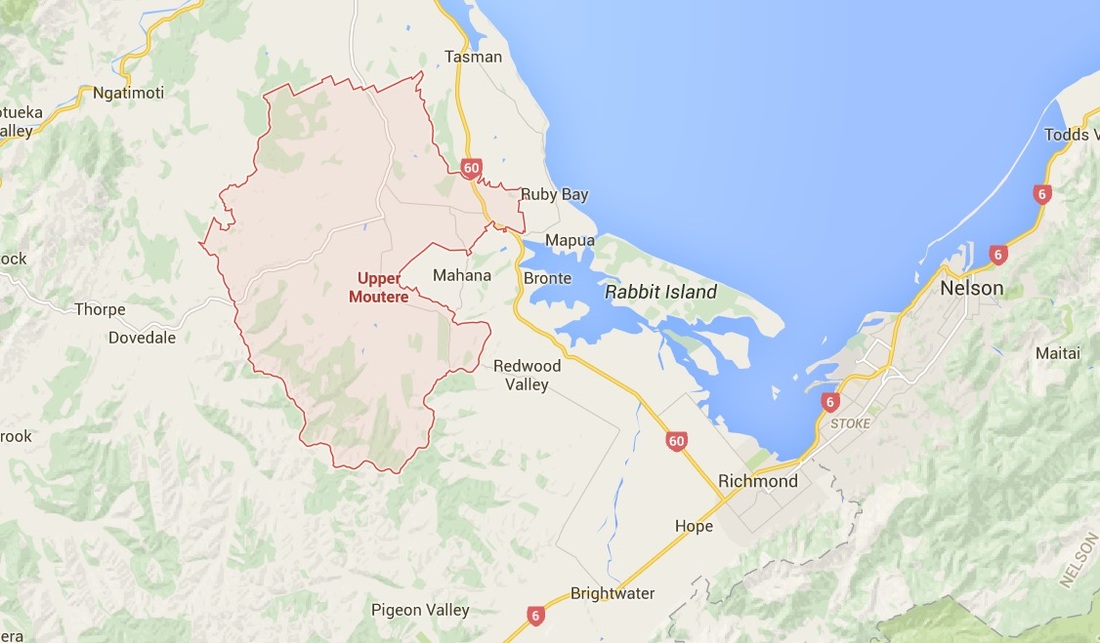 Proper Crisps set up in a shed near Upper Moutere making crisps using the Agria potato Stewart chose from the Temuka area of Canterbury. He found the texture, density, colour and flavour of this particular cultivar the best he’d ever experienced. Next, Stewart developed just the right technique for making a proper crisp which he identified as having the perfect thickness, cooking the potatoes for just the right time and, of course, attaining the right degree of saltiness. For the salty part, Stewart chose the sea salt from Lake Grassmere in the Marlborough Sound. All these components came together and Stewart was pleased, creating what to him seemed the best chip he could make.

People visiting the Nelson Farmers Market agreed and bought up Stewart’s crisps – as did other local markets and, eventually, stores around the South Island, including the Mediterranean Market in Queenstown before it became part of the Raeward Fresh team. Stewart increased production but kept his standards in place. Things hummed along nicely and in 2010 he sold the business to Ed & Mina Smith. The Smith’s were on holiday at the time and curious about real estate in the area. They came across a bag of Proper Crisps in Golden Bay and fell in love with the product… and wanted to buy the business!

Ed and Mina were tired of overly processed food and loved the idea of keeping Proper Crisps 100% natural, which meant hand cutting each crisp, hand stirring every batch, hand sorting and hand seasoning – right down to placing the person’s name on the bag who cut, stirred, sorted and seasoned those particular crisps for you! They were also exited about the possibility of building on Stewart’s winning tradition, using international influences paired with local ingredients, and extending Proper Crisps flavour offerings. This began with the creation of a Rosemary and Thyme crisp, the idea for which originated from Mina’s Grandmother’s roasted rosemary and thyme potatoes back in France. Next came the Smoked Paprika crisps, a flavour combination born of the couples’ Californian influences meeting the Kiwi BBQ vibe. 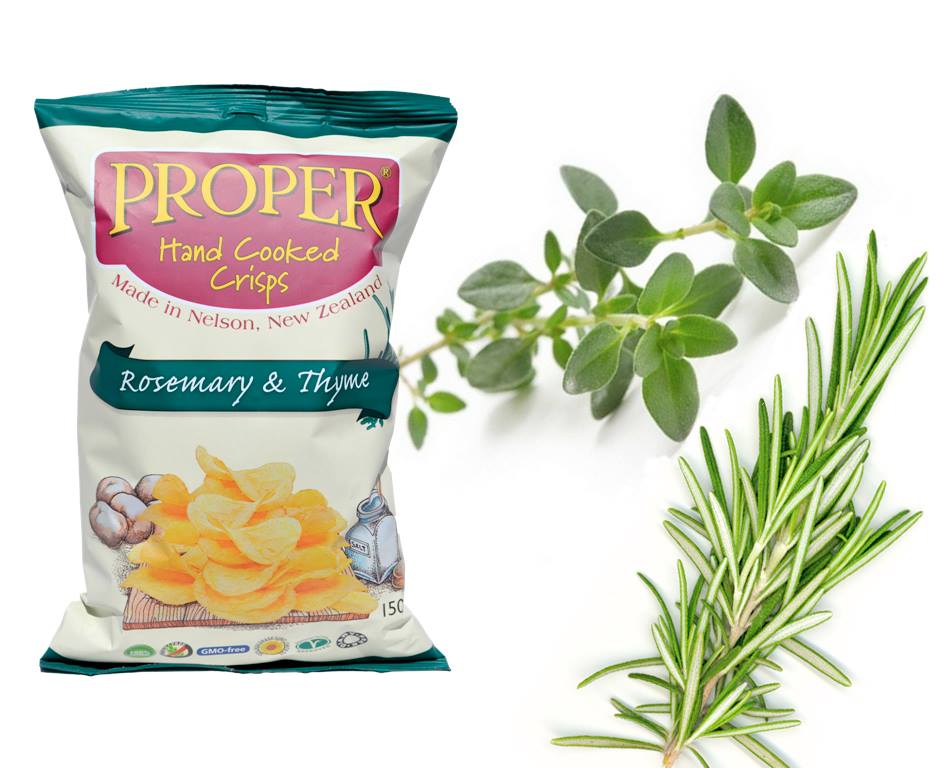 After establishing these new crisp varieties, the couple went further afield to look for other flavours and veggies to create into crisps. Ed was no newcomer to expansion, as he had already established a large baking company in the US (Ne-Mo’s) which had a reputation for delivering high quantities of quality baked goods all made from scratch using the best ingredients. Ed naturally brought these skills and experiences to Proper Crisps. The invention of their classic Salt & Vinegar Crisps highlights his expertise. In NZ, we love our salt & vinegar but most chips of this flavour type don’t even have vinegar in them but, rather, sodium diacitate and multi dextrons (super high on the GI). Ed and his team collaborated with an innovative engineering crew in Nelson to create an encapsulation process that takes real apple cider vinegar and makes it into a crystal that can season the crisps. They are the first in the world to do this. 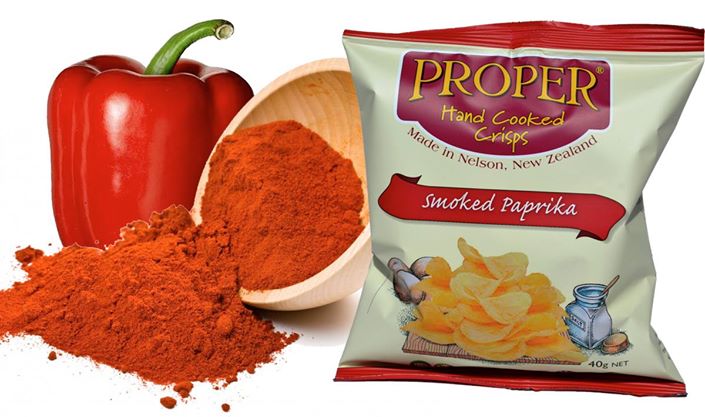 Next, Proper Crisps looked north to the Kairpara where Kumaras grow aplenty. They brought back huge bags of red, gold and orange kumara and began the R&D necessary to get just the right thicknesses, oil type (rice bran for these ones) and cooking times. They found that cooking times varied for each colour kumara. Such attention to detail results in what I think are the best kumara chips in the world (with, perhaps, a the exception of the red ones in the bag, which don’t quite match the sweetness and crunch of the orange ones). Having got that veg properly in the bag, the Smith’s looked at another iconic South Island root veg – the humble parsnip. They have recently finished their trials, translating all of Stewart Franklin’s core values into a bag of delicately sweet and salty parsnip crisps ready to snack on. In keeping with their values about healthy snacks, the Proper crew have worked hard to keep the fat quantities at a minimum and have searched for a parsnip variety with a higher density so the slices don’t absorb as much oil. I was fortunate enough to be able to try some of the trial versions and they’re a sensational crisp. Light, salty, sweet and delicious. 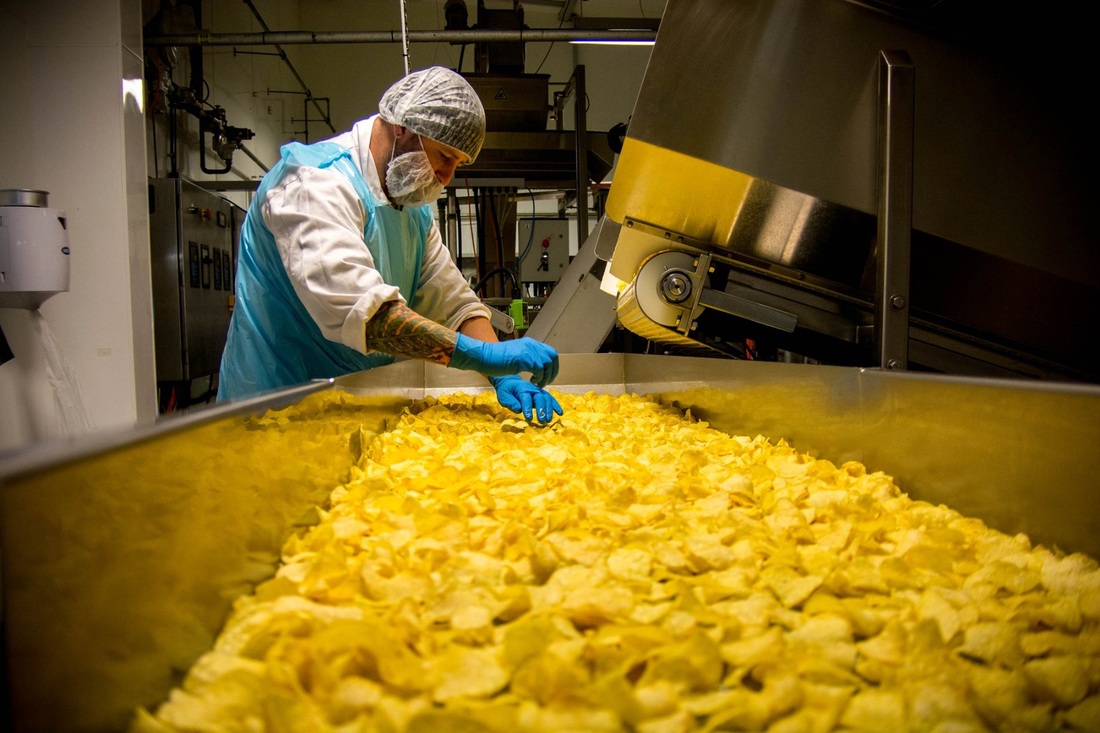 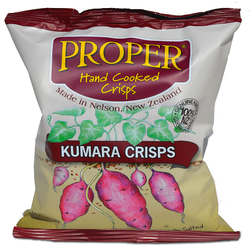 I really, really, really like this company. Solid values right from the get go, international influences properly localized and innovative flavours perfectly created to be as healthy (and delicious) as a crisp can be. On top of all this, Proper Crisps recycle all of their cooking oils into biodiesel fuels, a smart sustainability move which gets all kinds of cred in my book. The 21 people in the Proper Crisps team who have their work cut out for them keeping up with the demand from happy customers like me, are all working hard in their new kitchen in Stoke (Nelson), applying a proper mentality to the making of these fantastic crisps. I’ve especially appreciated Tina-Maree’s promotional work and her connection with the community (check out their Facebook). Keep your eye out for the new Parsnip Crisps now at Raeward Fresh as well. It’s been well worth the wait for someone to finally nail the production. Thank you Proper Crisps for taking some of NZ’s best and most abundant root veg and turning it into sweet as tasting chips!