With the notable exceptions of the preservation of corn and fish by the Maori, the only other real Kiwi fermentation tradition has been the making of beer. The Germans have their sauerkraut, the Koreans have their Kimchi and the American Midwesterners have pickled just about everything else. Cold climate cultures have always found a way to preserve foods using fermentation but, in New Zealand’s moderate-to-warm climate culture, we preserve beer to drink when it’s hot… or whenever, actually. Now, we do make some pretty outstanding beer here in NZ, but it’s too bad that this is where our fermentation endeavours end. Cultures that preserve their local abundance with probiotic rich fermentation processes (such as Napa cabbage, daikon radish, carrot and onions for the Koreans) enjoy the super tasty and super healthy benefit of preserves that last pretty much forever as part of their cuisine. And, they aren’t putting heaps of salt or sugar in their condiments.
In fact, properly fermented foods actually reduce sugar cravings – a happy finding Joanna Nolan learnt and experienced when she first explored the the world of live culture (fermented) foods. A personal trainer at the time, she was so impressed with this and a swag of other fermented food benefits that she ended up quitting her day job to create Be Nourished – her current business, making raw, unpasteurized, cultured vegetables & probiotic foods for health. 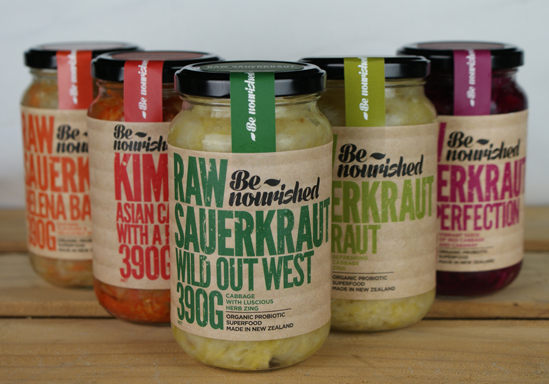 Like most New Zealanders, Jo grew up eating highly processed, white food staples, such as bread, pasta and sugar. Cornflakes topped with sugar for breakfast, white bread and whatever for lunch… we all know the drill. The litany of health issues to arise from eating like this for decades has become an alarming topic of many contemporary diet conversations, from onset diabetes to childhood obesity. As a personal trainer, Jo worked with heaps of people who had to deal with the sugar cravings born of the Kiwi diet, or wrestle with the increasing number of food allergies they were developing as they grew older. What really struck home, however, was when Jo’s first child started coming down with unexplained allergies. This, combined with the increasing general lack of energy Jo experienced as a young parent, led her to research healthful solutions. She read about the ground breaking studies by Weston Price in the field of fermented food. This topic of inquiry further came to life for Jo in Sally Fallon’s Nourishing Traditions. Learning how many ancient cultures preserved both their food, and their health, by utilising simple, abundant, everyday ingredients in fermented processes was a life changer for Jo.

Finding properly fermented foods ready to buy on the shop shelves in Auckland in the 1990’s was another matter. Jo was unable to get anything but pasteurized (read: sanitized to death, killing all the essential live cultures) sauerkrauts imported from far away places. The next step, then, was to simply make some for herself. At first she was daunted by the prospect of having to make something that had been developed for centuries without any local knowledge in NZ, and without any professional culinary experience herself. It was pre-internet and YouTube how-to’s for Jo in those days too, so armed with some informative books and possessing a mother’s dedication to the wellbeing of her family, she dove in and began making proper sauerkraut. Proper sauerkraut means small batch, live culture food with naturally grown cabbage, spices and a slow three phase lacto-fermentation process. Eventually, the adventure had a happy ending for Jo, who was surprised at how easy fermenting food was once she got the hang of it. She also found that by making these foods a regular part of her diet she lost her sugar cravings, felt her energy and mental acuity return and her son’s allergies went bye bye.

In effect, Jo’s digestive system was being rebooted. Her gut gained the living probiotics and phytochemicals it needed to absorb all the nutrients she was eating – probably for the first time in her life! Typically, our stomachs only absorb around 20% of the available nutrients in our food. Fermented foods can boost this uptake to around 80%, which has many positive effects across our metabolic functions. (The health aspects of Be Nourished products are better described on Jo’s web site which you can find here). Jo was so glad with the personal health results that she started sharing her homemade fermented foods with friends. As you might imagine, Jo’s friends weren’t quite as enthusiastic about the prospect of sauerkraut as she was. Undaunted, and emboldened by her families increasing health, Jo decided to bottle up some of her recipes and take them to the Oratia Farmers Market. But the response was the same. The guy next to her selling Pics Peanut Butter had jars flying off the table while her sauerkraut sat there, continuing to ferment.
Jo knew how tasty and healthy her creations were but the average Kiwi neighbour or market shopper just didn’t get it. It wasn’t until she took a few jars to some friends who ran a proper health food store that things started to change. People who knew raw foods and understood what a bit of raw Apple Cider could do to jumpstart the metabolism in the morning (for instance) saw Jo’s live-culture foods as a blessing. They appreciated that Jo’s recipes moved way past the hippie raw-food-in-a-jar vibe (really healthy but stinky as, and, super strange tasting) and into some highly developed and refined sauerkrauts and kimchi. Jo had both the common sense and ability to take the best of her local food environment and blend it in a delicious way. Her culinary results were crying out to be paired with elements of a newly developing Kiwi cuisine. For example, her Helena Bay Sauerkraut is a mix of cabbage, carrot, onion, garlic, ginger and a hint of chilli, the combination of which comes from her living in that beautiful region up North. She pairs this kick-ass kraut with a steak sandwich, or tacos and nachos. A great fish taco on a soft corn tortilla needs a good slaw but Jo’s Helena Bay mix works even better (in my opinion), adding a lovely kick to the battered or blackened fish in the taco.
Recapturing and reconfiguring of foods from far away times and places is another facet of modern Kiwi cuisine and it’s boutique producers serving up their best. For Jo, it’s about health and flavour, two essential aspects of a good life. Having been eating Be Nourished all week, I’m feeling pretty good myself, and, I have to say Jo’s nailed both the classic flavour dynamics of traditional sauerkrauts and kimchi (I grew up with both) and added some lovely fresh twists which I’ve found a delightful addition to my morning toast, can salmon salads and a number of dishes I look forward to creating in the coming weeks. Jo will also be adding to her range of fermented food in the coming months so keep your eye out and your taste buds open.
(Keep your Be Nourished goods in the fridge as these foods are alive, and will keep you so too.)
Recipe: Raw Probiotic Salad Dressing Recipe

Jo was kind enough to pass on one of her favourite salad dressings, which would be great on a mixed salad of any kind.
1 Part – Be Nourished Sauerkraut Juice any flavour
1 Part – Extra Virgin Cold Pressed Olive Oil
2 Parts – Braggs All Purpose Seasoning (also at Raeward Fresh)
2 Parts – Tahini (hulled or un-hulled I like hulled for a lighter flavour)
Put all ingredients into a jar and shake to mix.