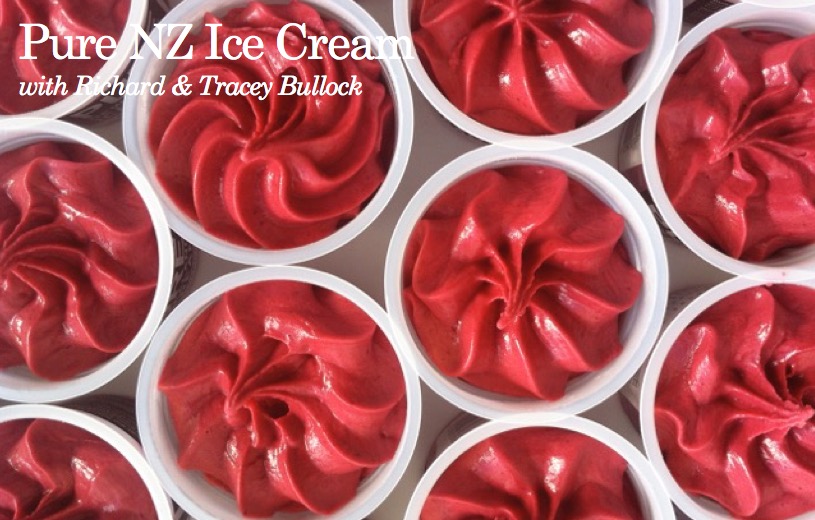 If you’ve ever made your own ice cream and done it well, you’ll know the results are hard to beat. My personal favourite: I absolutely love whipping a bit of cream, stirring in some Argentinean Dulce Leche (caramel), sprinkling on a bit of Marlborough sea salt, then throwing it in the freezer for a few hours. The super creamy texture, the simplicity of the ingredients shining though, the knowledge that just a few fantastic things have gone into the making… well, it makes buying an average ice cream a waste of time (or, at best, a compromise). But if you’re buying hand made ice cream created by someone who has a whimsical instinct for fantastic flavour combinations, a commitment to simple, quality ingredients and access to a local herd of alpine cows…. 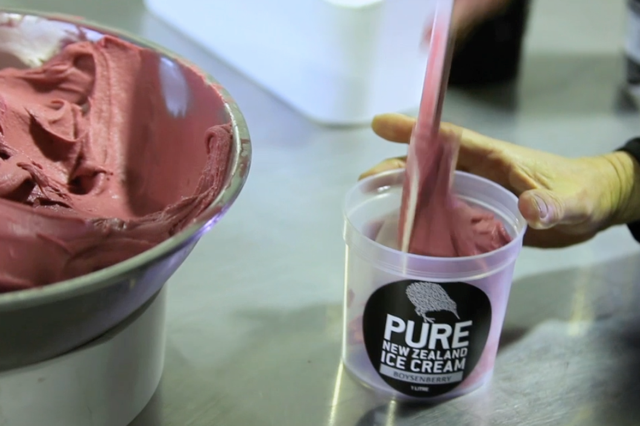 Richard & Tracey Bullock make their own ice cream too. They wander over to Lagoon Valley Farm in Wanaka, the town where they live, and get some beautifully fresh alpine milk and cream. They head back to their kitchen (a commercial one) and mix in a dollop of their home made mascarpone, some oranges and some dates. They churn it up and freeze it down. Beautifully done. Or, they’ll simplify things even more and whip up another batch, this time with only Belgian chocolate and cacao, an ice cream that becomes so dark even light can’t escape it’s intense flavour. Done. And when the whimsey hits, they’ll infuse that alpine cream with ginger and kaffir lime (using organic leaves from the Hawkes Bay) to create some summer magic. Done. All these fabulous ice creams get placed, by hand, into tubs of what has become a constantly award winning product. It’s Pure New Zealand Ice Cream. 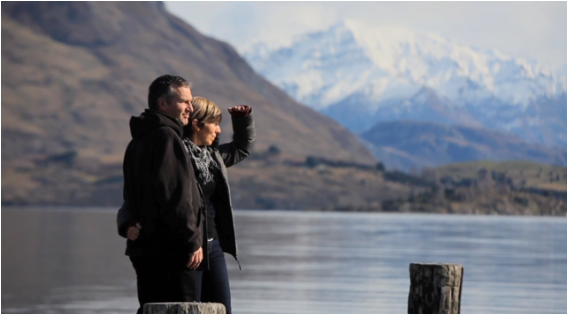 Richard and Tracey really own that name. It goes to the core of who they are as people, as a family and you can see it right through their story. Richard grew up in Wellington but, as seems to be the right of passage for a lot of young Kiwi’s, growing up in one of the most amazing cities in one of the most amazing countries in the world just wasn’t enough (okay, so actually, Wellington wasn’t as cool back then as it is now, so, yeah). So Richard moved to Sydney’s northern beaches and worked in the restaurant scene for quite a while. As a chef, restaurant owner and entrepreneur, Richard particularly loved making desserts from a wide palette of influences and flavours which complimented Tracey’s skills and experience working alongside Richard in these areas. And of the desserts they like to make the most, their favourite was going from churn to plate, where they could whip up something local and fresh (both in terms of ingredients and concepts), churn it in the commercial kitchen’s ice cream maker and deliver it just in time for dessert. We’ve all seen this on the cooking shows, and yes, I want one too… right next to the Rocket E61, KitchenAide 5qt mixer and Vitamix blender I’ve yet to attain.

Richard was fortunate to meet Tracey while living over-the-sea, but as their family grew (they have two daughters, Lara & Tess) and the stress of Sydney life bore down, the couple decided they wanted to slow down a bit, do something they loved and fully owned, while raising their children in a pure place. Wanaka it was then and ice cream became the extension of their food world. They moved back to NZ bringing a rescued ice cream churn from the basement of a Sydney restaurant and settled down. Tracey did some local school teaching and Richard worked at Treble Cone Ski resort to begin with. In the summers, Richard and Tracey would navigate that tricky road up the hill each day and use the empty kitchen to start churning out (get it, churning… clever eh?) ice cream. Richard’s background as a chef and a true Wellingtonian innovator appeared in his concepts and flavours which was backed by Tracey’s hospitality experience and tastes, having worked with Richard in their food and catering businesses back in Sydney. Take, for example, the special ice cream they came up with for Madame Woo’s in Queenstown (an innovative, beautiful restaurant space re-imaginging Asian street food) – salted coconut and mango! Bam! The couple’s Boysenberry is also exceptional. Like good chefs, they know where to find the ingredients that pop with flavour and keep it simple from there. This would include Pure NZ Ice Cream’s vanilla bean. Lovely and rich while being creamy as.
As you can imagine, Richard and Tracey will have nothing to do with artificial colours, flavours, synthetic stabilizers, emulsifiers, gluten or gelatin. And for those who can’t do dairy, their sorbets, like the amazing passionfruit and banana, are dairy free and fabulous. These guys are solid creatives with a makers attitude living in a region that calls out purity and passion every day. What they make by hand, putting their heart and skills into, using the great ingredients they have access to in Wanaka and further afield, makes me completely fine with buying ice cream from someone who can do it even better than I can. Every time I pass by the freezer at Raeward Fresh, I spy those tasty tubs with new flavours emerging each season and wonder if they’ll make it all the way home this time… 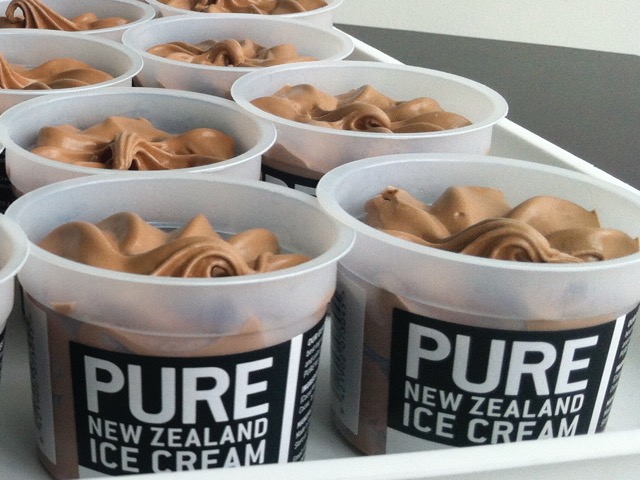