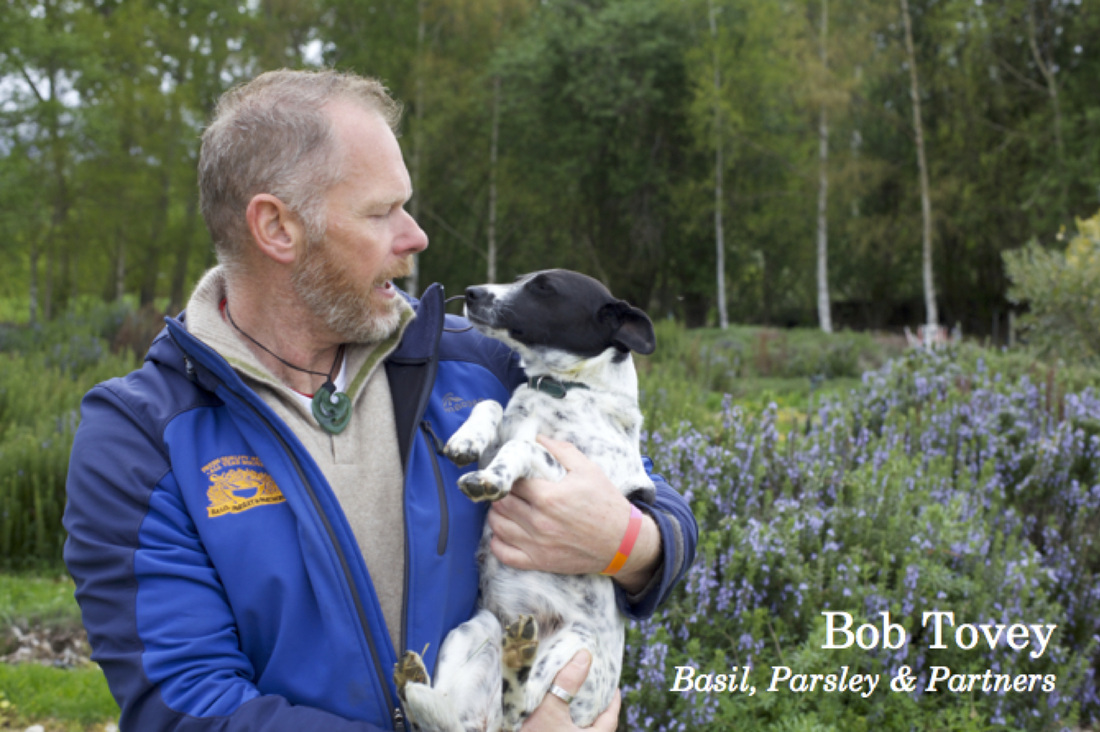 More than 20 years ago Bob Tovey left the U.K. for his big OE (overseas experience) looking for an adventure. Traveling on the bus from Christchurch to Queenstown, he was “gobsmacked” by the dramatic beauty of the Lindiss Pass and the Kawarau Gorge. Like a lot of newcomers, Bob worked in hospitality and loved what the region offered – a great place to party and ski like crazy. He was so taken with the area that he started looking for opportunities to stay and began asking some of the local chefs he’d gotten to know what they needed most. The resounding answer – really fresh herbs. Bob had found his niche and his inner gardener went to work. 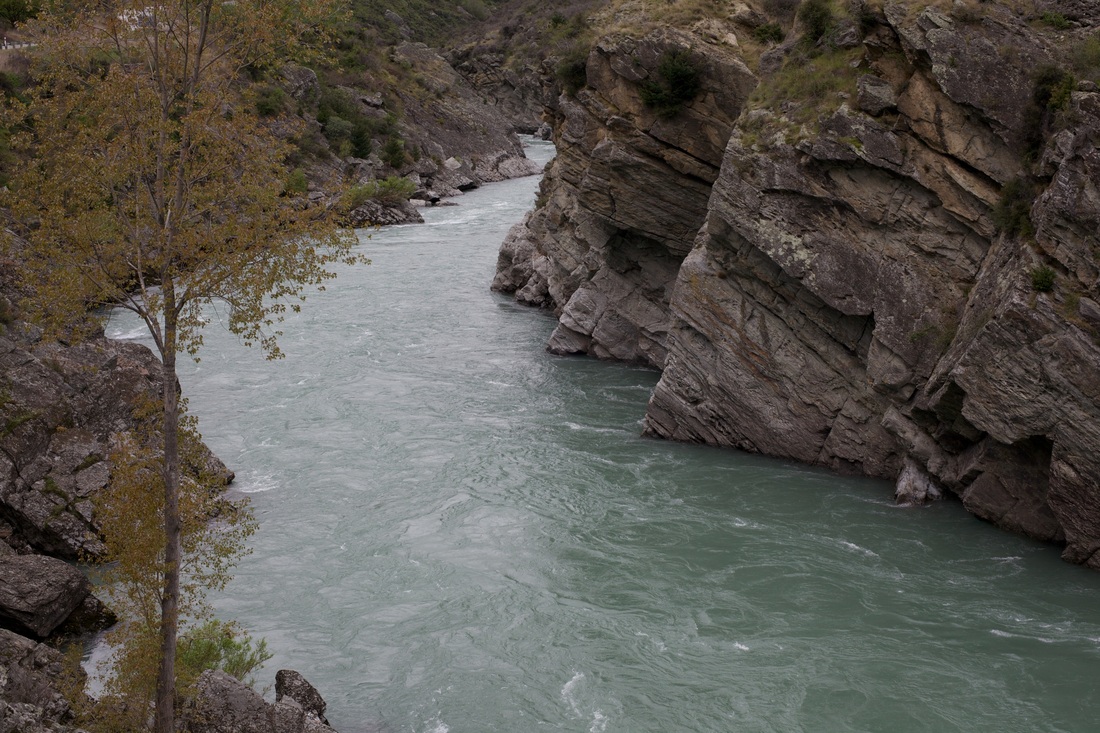 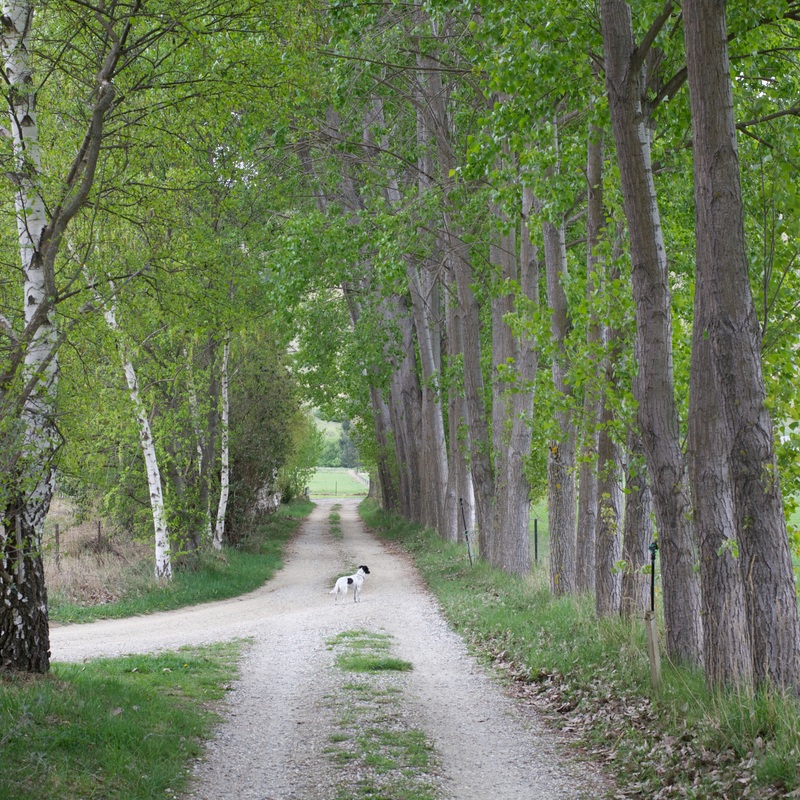 As a child Bob loved growing stuff. He’s always thrived on learning new ways to grow whatever he could get his hands on. Early on, Bob took a horticulture course in Cromwell – where he also bought a property with three greenhouses, a packing shed, a home and a small swimming pool – all for the price of what a plot of land would cost closer to Queenstown. He started off with tomatoes (the original use of the greenhouses), but after buying a freezer from Bob Colby at Crystal Gardens and checking out their hydroponic system, Bob decided to start growing herbs using a mix of the same greenhouse technologies and some good old fashion dirt based gardening.
Bob’s new business; Basil & Parsley, started off by growing, well, basil and parsley. Humble beginnings but local chefs loved it. Bob was (and still is) nuts about quality herbs and his were fresh as. They didn’t have to travel from up north, and they were exactly what the top chefs at The Rees or Blanket Bay were looking for. Initially, Bob packed his car full of herbs and drove from restaurant to restaurant, meeting chefs and asking what else they wanted. His initial offerings also included thyme and rosemary, but as Bob got around and payed close attention to the requests he was getting, more and more herbs were added to a growing list which now includes over 60 varieties. 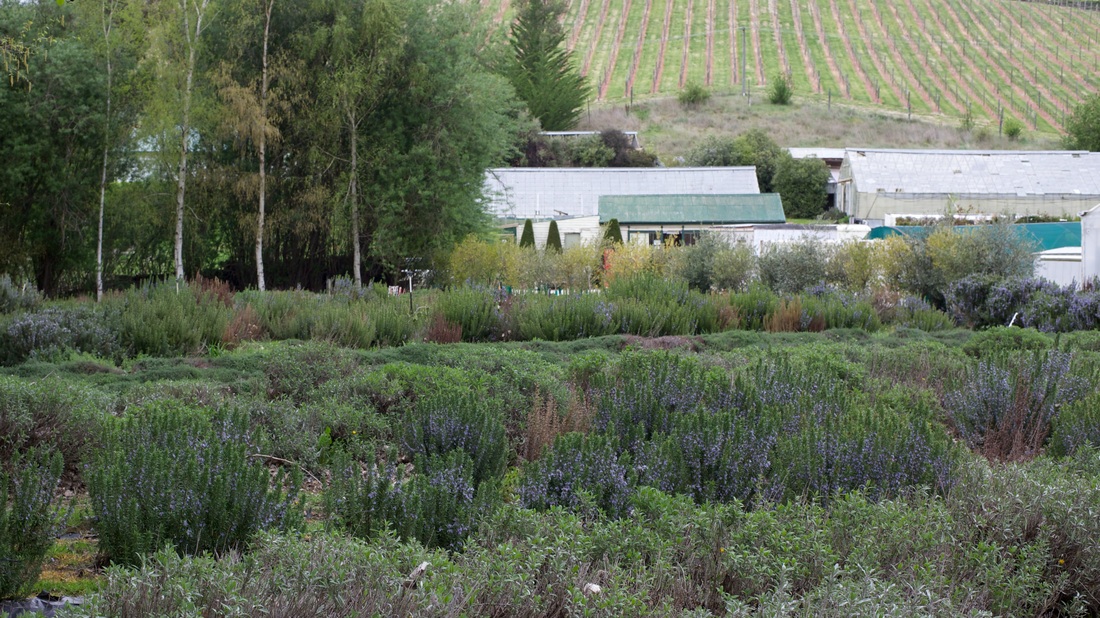 After his initial forays into the restaurant world, Bob met Nathan and Grant Imlach who became his first big customers. The Imlach family were running a wholesale produce business in Queenstown, Wanaka and Te Anau at the time and Bob immediately liked their business nous and focus on high quality produce. When Nathan and Angela sold the wholesale side and started the Mediterranean Market (now Raeward Fresh), Bob, like a lot of other producers, kept a direct connection going, largely because of his appreciation for Nathan’s relational approach to suppliers and Angela’s attention to detail on the shop floor, which Bob says keeps things “looking F—–g great” at the Market.

Bob still thrives on working with local chefs and other customers who are as passionate as he is about amazing food. He’s always on the lookout for new things to grow and his mind is full of invention. He’s still up on the hill, skiing as much as he can in winter and he’s out visiting the rest of the world in summer – on the lookout for what people everywhere are growing and eating. Heading back from an overseas trip, he’ll often call up his mates at Kings Seeds and ask if they can supply him with this or that. He pushes their envelope regularly and they tell him which ones can get through bio security. 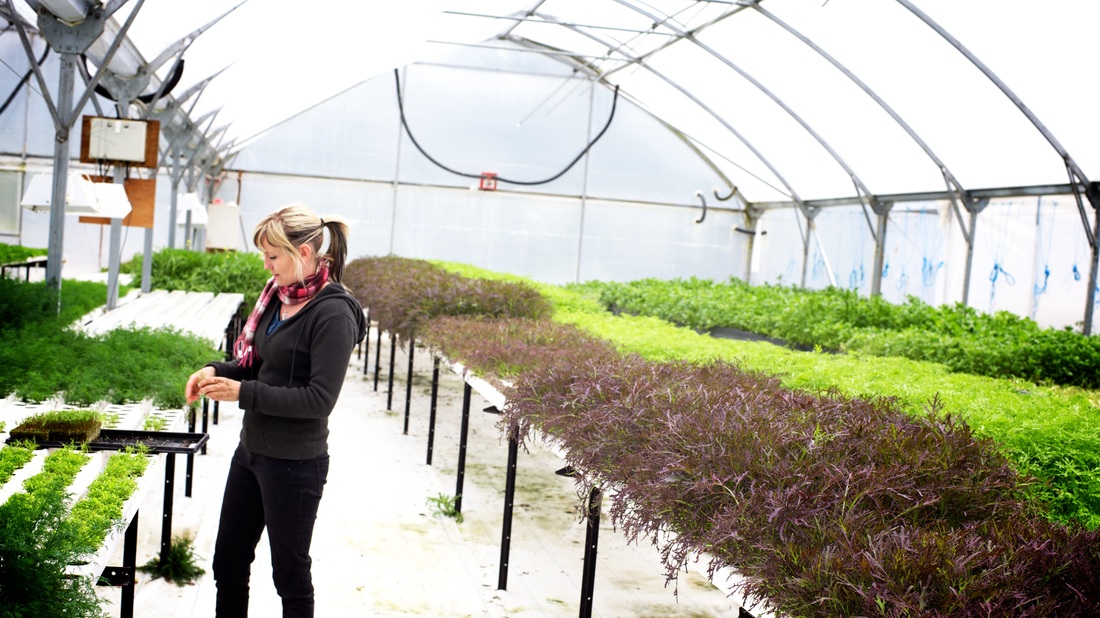 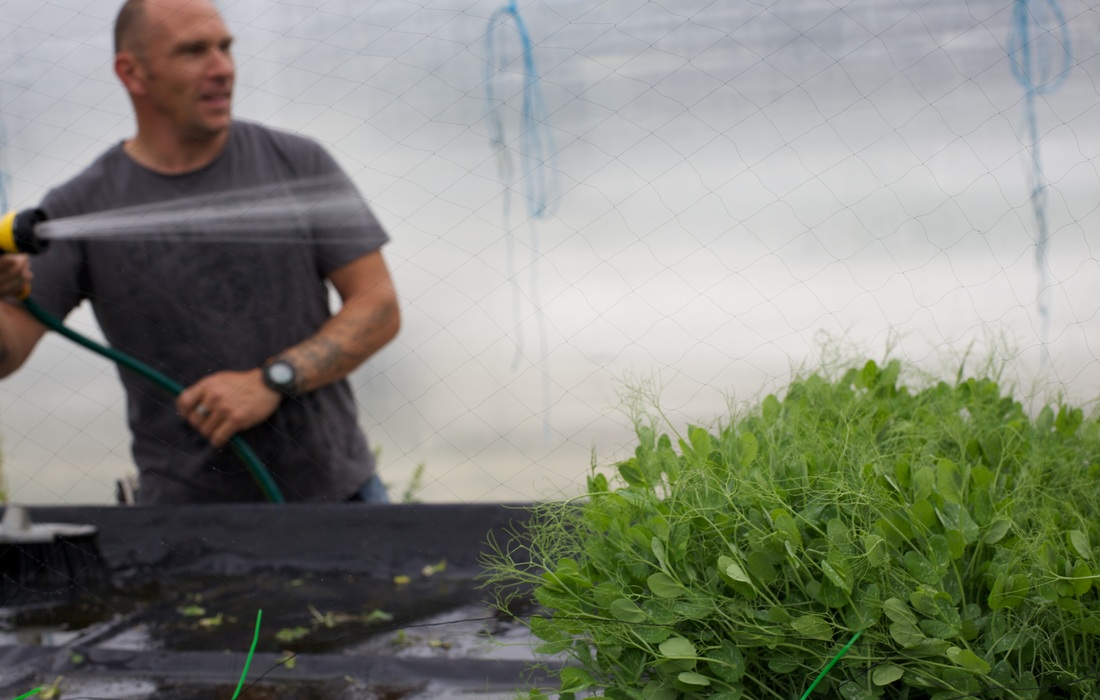 Like many of the regions innovators, Bob is very very passionate about his work. He employs people who love growing stuff and teaches them everything he knows. The Basil & Parsley crew regularly troll through seed catalogues together to come up with new crop ideas as part of their ongoing learning and collaboration. Bob also taught at the same horticulture class he attended years before which also trained the regions up and coming chefs (who would become his future customers). He loves that he also got truck loads of new plants to add to his budding orchard, and of course, he also wanted to share decades of gardening knowledge with people like himself. 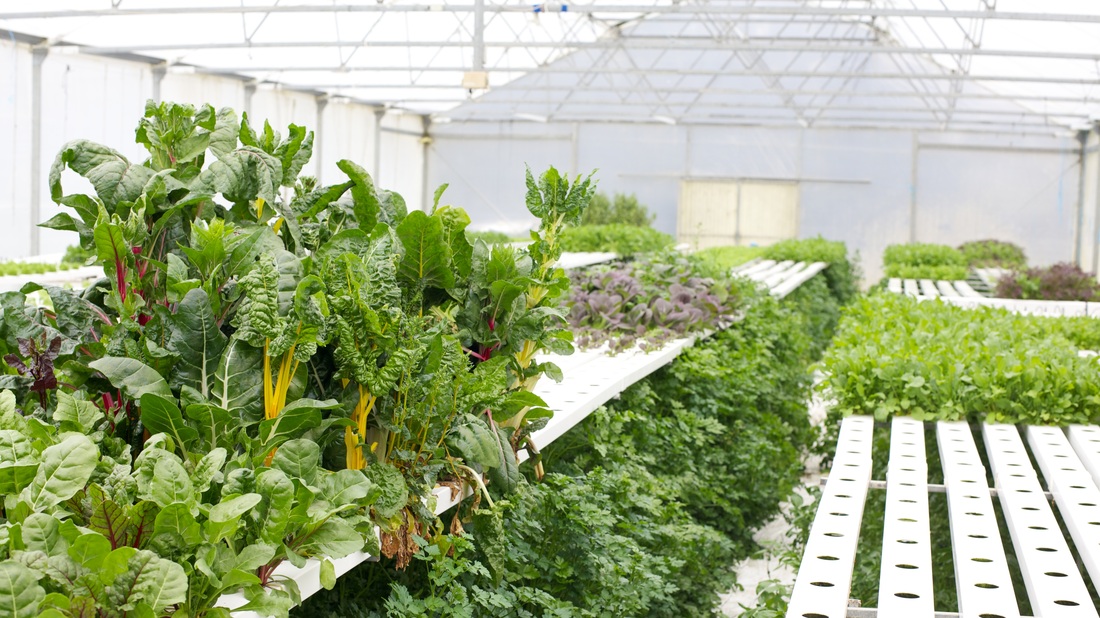 Walking around Basil & Parsley, you get the feeling that you’re seeing Bob’s mind writ large in an eclectic mix of old world gardening sheds and modern technologies. There’s a huge pink and green silverbeet (swiss chard) growing under a hydroponic trough. I ask why and he tells me it’s because a seed dropped there once upon a time. There’s a few eggplant (aubergine) plants thriving alongside the lemon balm. Bob doesn’t sell eggplant, but he tells me “what the hell, the staff can enjoy it”. There’s some gorgeous dill, and I mean, the best dill I’ve ever seen, flourishing just outside the chervil greenhouse on the doorstep, because, well, “that’s where it likes it”. The walkways have mint (spearmint, vietnamese and orange) popping up in amongst the wood mulch and doing as well as in the greenhouse. Mustard streak greens, the beautiful big peppery purple leafed stuff, lives just outside the packing shed, guarded by a happy garden gnome on a stump, watching over all the deliveries. It all makes sense, at least to Bob. 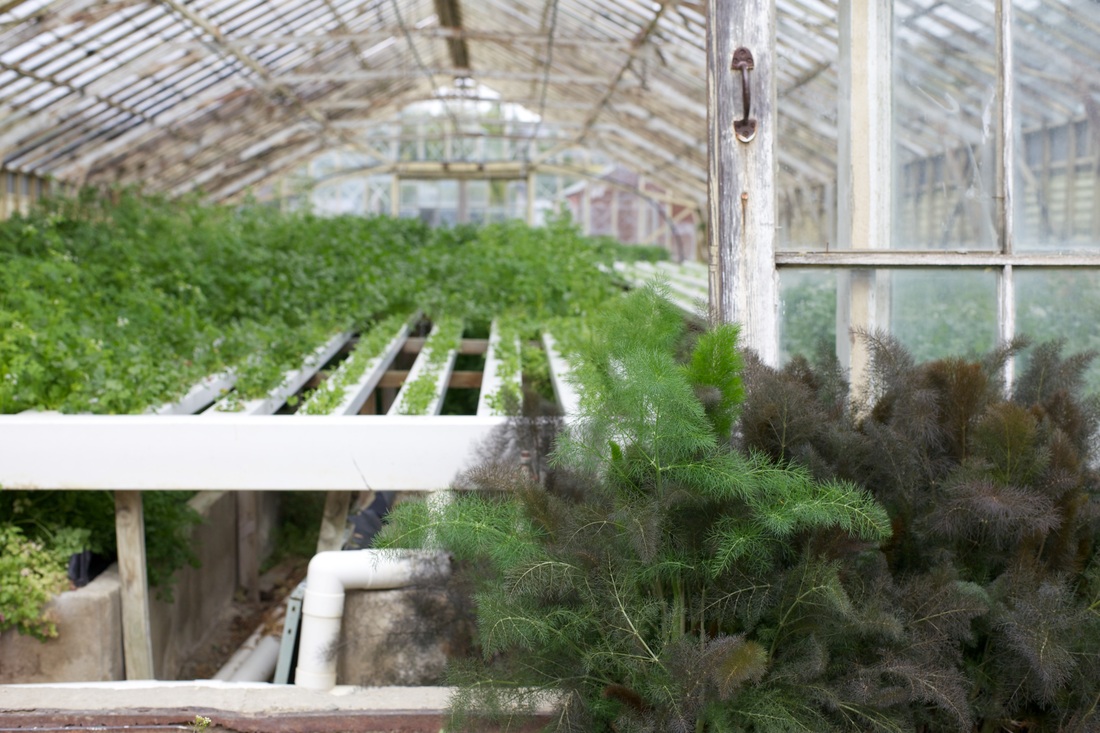 Basil, Parsley & Partners is like Wonka Land for herbs and Bob is Willy working his magic. For example, while showing me his tall aromatic french tarragon running through old-world troughs between even older greenhouses, Bob tucks the tip of one of the taller plants back into the ground claiming that this way, it’ll sprout new plants and keep the crop healthy harvest after harvest. Bob loves these plants, and one gets the feeling that they’re actually growing off some of his energy. His spontaneity and enthusiasm shows up in the random patterns of rows of oregano dotted with tall kale plants. His business sense seems to be revealed in the neatly ordered and plentiful boxes of micro greens and wheat grasses, glistening with freshly sprayed water droplets, looking as happy as can be. One day, when the new greenhouse is finished (his sixth), he’ll enlarge his kale crop and a few dozen other yet to be revealed ideas, because, I think, he just can’t help it. 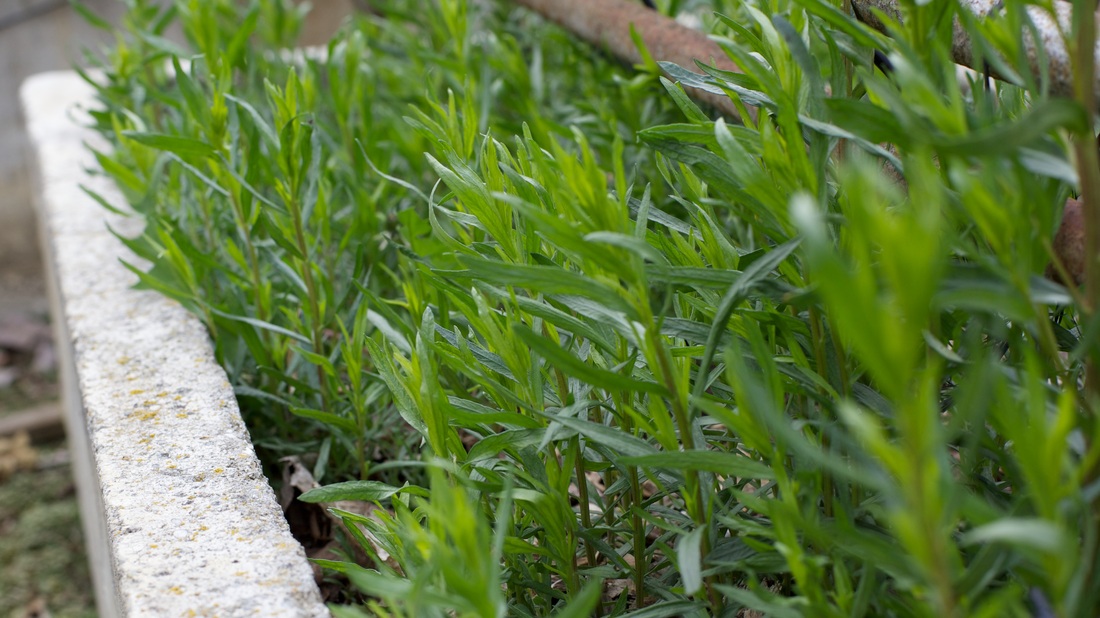 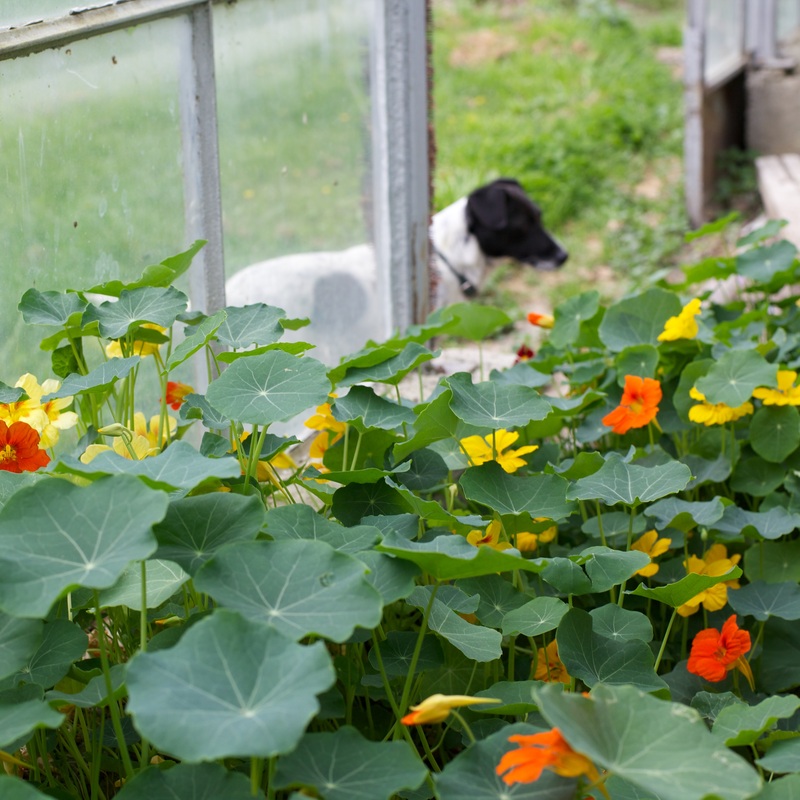 Raeward Fresh stocks a wide selection of Bob’s herbs. If there’s something special you need, just ask at the store or get in touch with Bob to see if he’ll grow it. Next week, we’ll highlight some of Basil & Parsley’s collection of herbs with our chef Anne Halson. 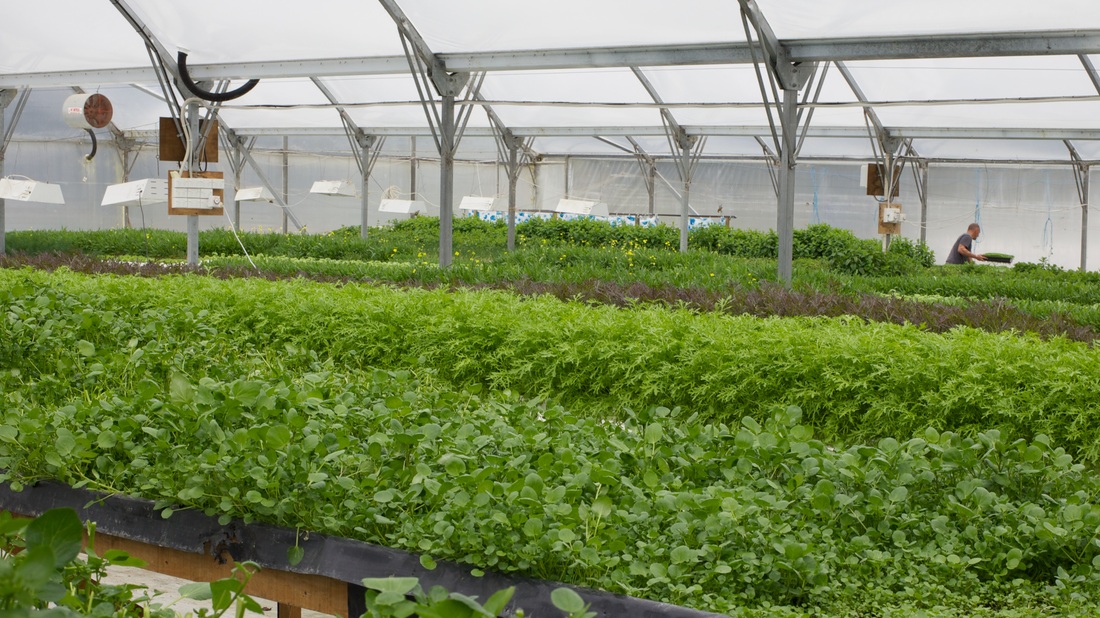 Nutritional advice from Kim Malcolm
Herbs are medicine
Herbs will jazz up just about any dish with flavour and colour but they’re are also incredibly good for you. Each one provides different benefits for your body, but lets take a closer look at Bob’s namesake, basil and parsley.
Basil is such a gorgeous aromatic herb and hailed as a medicine because of its strong anti-bacterial, anti-oxidant and anti-inflammatory properties. It’s rich in vitamin A, K, C, magnesium, iron, potassium and calcium. The next time you’re enjoying the flavour and aroma of basil in your pesto or salads, remember that it’s also working for the good of your body and taking care of your cardiovascular health.
Parsley is really versatile. As well as being a wonderfully nutritious and healing herb, it’s full of vitamin C, which supports your immune system and vitamin A, which actually has been termed the ‘anti-infective’ vitamin. It’s great for cardiovascular and cancer prevention in our bodies due to the folic acid content as well as a plethora of other goodies for your body. All I can say is enjoy these and many other herbs in your food everyday!