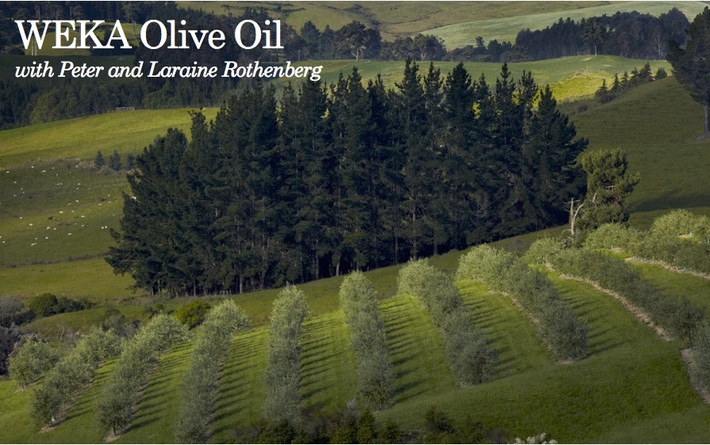 The word serendipity was first coined by Horace Walpole in 1754 describing people who were “always making discoveries, by accidents and sagacity, of things which they were not in quest of”. This well describes the tale of Peter and Laraine Rothenberg’s journey and the creation of WEKA Olive oil. From the corporate halls of Manhattan to the fertile hills near Motueka, the Rothernbergs have wisely happened upon green, gold, silver and bronze – the colors of the many awards they’ve received.

Peter and Laraine had been practicing law in NYC for decades when they decided to start planning their retirement. Their son had helped identify the Nelson area as a beautiful place to buy a small home where the Rothenbergs could ‘get away from it all’. As foreigners, buying anything bigger than a small place triggers acquisition laws which Peter and Laraine did not want to get tangled up in. However, having looked around the Moutere Hills they fell in love with a 350 acre block previously used for sheep farming. Acquisition laws now triggered, they had to come up with a beneficial (to NZ) business plan. They decided on timber and bought the place. Sheep still graze part of the block and the NZ timber industry has a few more pine trees to mill now. So far, so good. But on a trip to Waiheke, Peter and Laraine saw some olive groves which they thought would make a lovely border in the place between their home and budding forest. 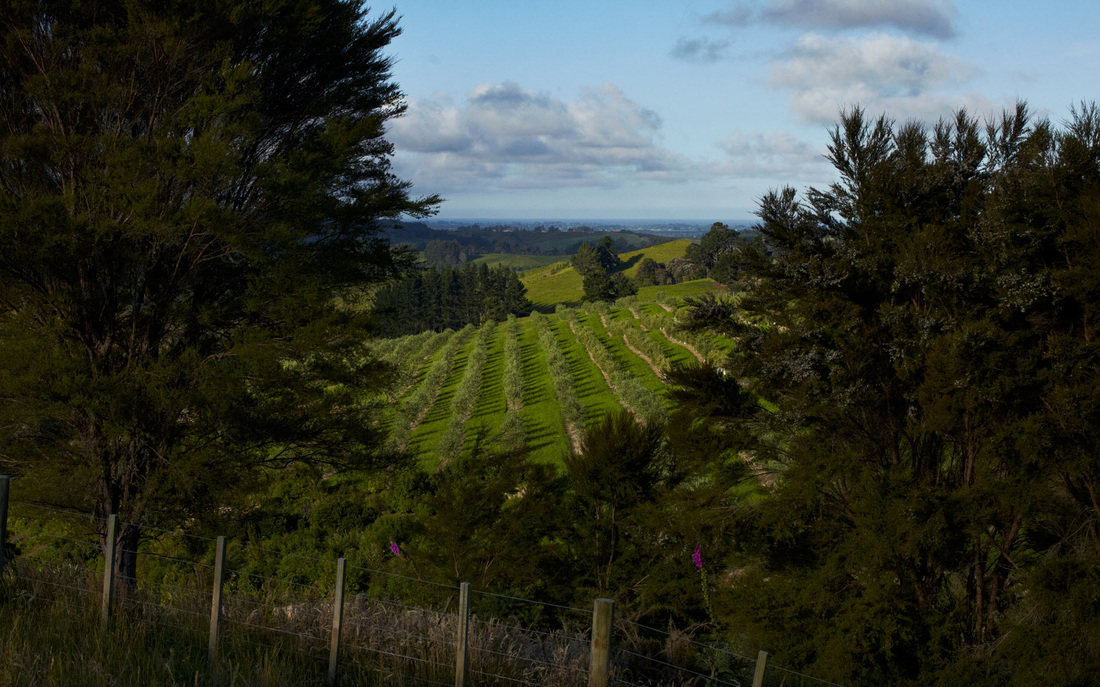 This is where the sagacious character of the two takes them another step towards serendipity. In choosing which trees to plant, the pair did their research (once a lawyer…), hired a consultant and decided to plant a bit of a grove (1400 trees) instead of a border. They went with Leccino and Frantoio trees for their fruitiness as well as the rarer Greek Koroneiki for it’s high yield of bold peppery olives. The land they’d purchased happened to be rich in Moutere Clay (perfect for olives) and at an elevation which lifts them above the frosts, meaning their olives can stay on the tree longer and develop their fullest possible flavours.

Working with local growers, the regions co-op olive press, consultants and a few of their own employees, the Rothenbergs started WEKA Olive Oils. In querying the two on how they created such an amazing product in such a short time (as legal types!), they told me that living in Manhattan had developed a foodie palette which knew quality when they saw it. And they saw it in the New Zealand landscape, the prolific growth of its agriculture and the innovative people working by their side. It’s been lots of work and due diligence to get things this far, and the Rothenbergs have added a bit of their own adopted Kiwi ingenuity to keep things going, like the ‘bird scarer’ they’ve installed to ensure the ripening olives remain on their trees. The last few years have been full of discovery, accidents and sagacity which has resulted in an award winning olive oil.
I sampled some WEKA Olive Oil this morning with a little home made ciabatta. The verdant green immediately impresses as fresh and rich. The first notes of flavour taste like the hilly fields in which the trees are grown, followed by a mellow olive green which worked beautifully with the fresh bread by itself and then even better as a compliment to the hummus I added. This is definitely a dipping oil, and too precious for cooking with. It’s a little pricey, but not more than a good bottle of wine – and it would last much longer once open. There are a few applications for this level of certified extra virgin oil, (see recipe below) but I suggest starting out with it as a dipping oil, then using it for dressings and perhaps specialty baking after that. It’s so good, you’ll want to pair it’s use with your other best ingredients and foods. It seems that what started as a simple retirement plan has now wonderfully evolved into one of New Zealand’s premier olive oils. It’s so good, they even sell it back in Manhattan! 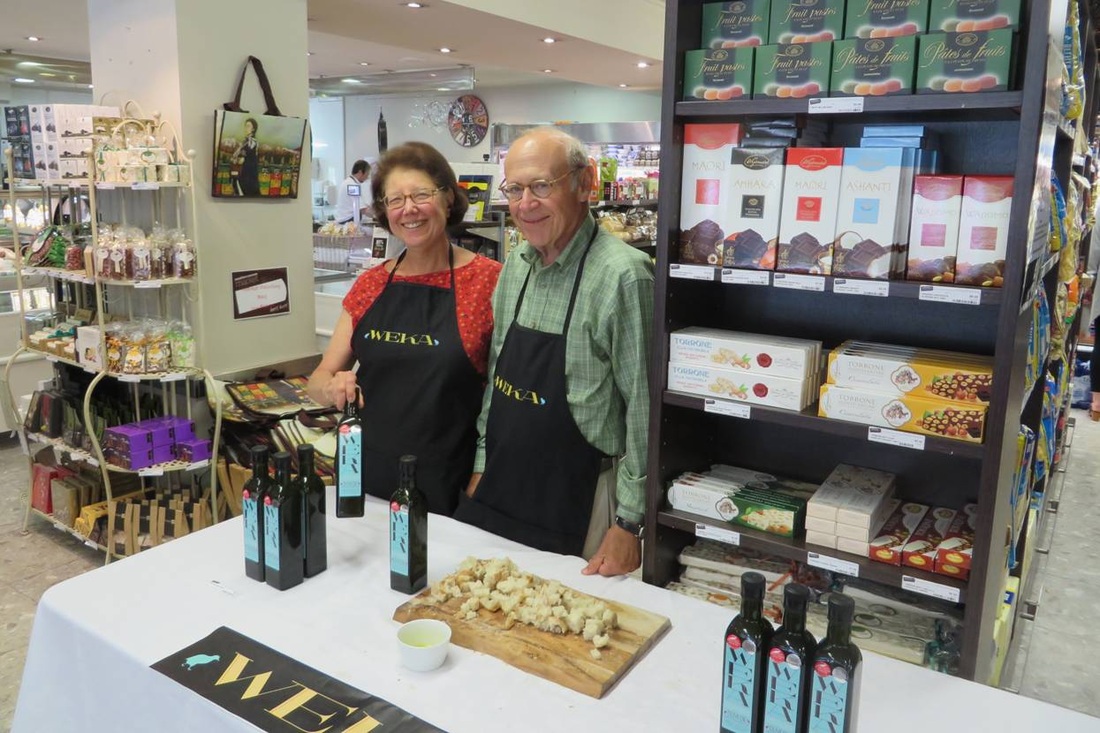 
Ingredients:
For the dough
250g rye meal or wholemeal rye flour
250g wholemeal wheat flour
12g of salt
12ml of WEKA Extra Virgin Olive Oil
3g freshly ground pepper
150g of Don Rodrigo sourdough starter (or similar)
225ml of cold water
*extra sea salt to sprinkle
For the topping
WEKA Extra Virgin Olive Oil
Fresh rosemary
Preparation:
• Mix all the ingredients for the dough in a mixing bowl (you might need an extra bit of water, but not too much, this should be a firm dough, but easy to roll). Mixing the dough should take only 5 minutes – you just need to bring the ingredients together, there is no need for kneading. Cover the dough with plastic and let it rest at room temperature for 6 hours.
• After 6 hours the dough should be fermenting, because of the low content of gluten it will not grow. The dough will be ready to roll when it tastes sour.
• Cut into pieces of 120gr, roll the dough (1mm thick), place the pieces of dough on the trays, sprinkle sea salt and bake for 15 minutes at 170 degrees Celsius. The dough is baked when it is not soft in the middle and it has a light golden colour. Transfer immediately to a cooling rack and spread a mix of the olive oil and fresh rosemary (ideally mashed in a mortar).
• Serve with cheeses, paté, or put it in the kids’ lunch boxes, they will go crazy!